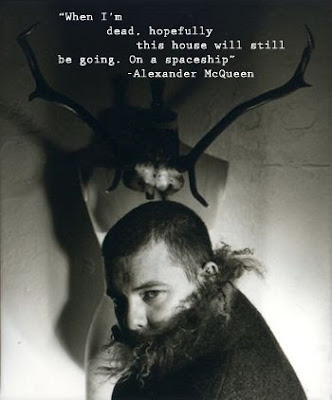 The Costume Institute's gala at the Metropolitan Museum in New York is a fashion exhibition like no other. Each year, the world's media waits with bated breath to dissect the threads donned by the high-profile guests in attendance of each event, while the exhibition itself is one met with much anticipation. Next year's offering however, has already received a massive surge of interest as it was revealed today that they shall be celebrating the career of the late, great Alexander McQueen with an intimate retrospective entitled: Alexander McQueen: Savage Beauty.
Taking place from May 4th through to July 31st, 2011, the exhibition will showcase all of his work, right from his Central Saint Martins postgrad collection from 1992, straight through to his final runway presentation unveiled shortly after his untimely death last February. The tribute will be an intimate portrayal of the iconic designer through his designs which have been categorized into a number recurring themes and concepts:
The Savage Mind will examine his subversion of traditional tailoring and dressmaking practices through displacement and deconstruction.
Romantic Gothic will highlight McQueen’s narrative approach to fashion and illuminate his engagement with Romantic literary traditions such as death, decay, and darkness. It will also reveal the main characters of his collections, including femme fatales and anti-heroes such as pirates and highwaymen.
Romantic Nationalism will look at McQueen’s fascination with the distant past.
Romantic Exoticism will examine his focus on distant places.
Romantic Primitivism will explore McQueen’s engagement with the ideal of the “noble savage.”
What's more, the exhibition will include videos of McQueen's runway presentations, reveal an assortment of “atavistic and fetishized objects,” including collaborations with Philip Treacy and Shaun Leane on display in a “Cabinet of Curiosities" and shall also feature an interview with Alexander McQueen's creative director, Sarah Burton. To accompany the exhibition, Costume Institute curators Andrew Bolton and Harold Koda are compiling a book, Alexander McQueen: Savage Beauty in homage to the designer.
When asked about the work of McQueen, Andrew Bolton puts it best; “Alexander McQueen was best known for his astonishing and extravagant runway presentations, which were given dramatic scenarios and narrative structures that suggested avant-garde installation and performance art. His fashions were an outlet for his emotions an expression of the deepest, often darkest, aspects of his imagination. He was a true romantic in the Byronic sense of the word — he channeled the sublime.”
Posted by Aideen Shannon, Features Assistant at 6:16 pm