The Godfather of Street Art 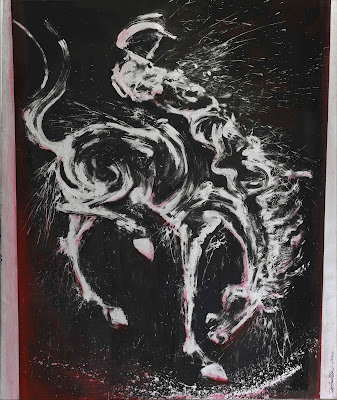 Richard Hambleton has experienced a notoriety like no other since he initially rose to fame in the early 1980's. Making his mark on the streets of New York, San Francisco, Berlin, Paris, London and Japan, Hambleton's visually arresting public art, most notably his Shadowman and Crime Scene series, has played heavy influence on street artists Blek Le Rat and Banksy.
As the last influential surviving member of the East Village Art Movement, Hambleton -who has often been heralded as the "Godfather of Street Art"- has led a relatively reclusive life for the past twenty years and yet has still managed to retain a constant presence on the art scene. With past works having been exhibited in the likes of The MoMa and The Houston Museum of Fine Art, Hambleton's latest venture sees him becoming the subject of new exhibition in collaboration with fashion power house Giorgio Armani. Curated by Vladimir Restoin Roitfeld and Andy Valmorbida, the exhibition shall feature 45 works (25 of which have never been seen before) and shall open at The Dairy on the 18th of November. Joining forces with Armani through a shared drive of "Individual passion and creativity", the exhibition shall continue until December 3rd.

Of the exciting collaboration Vladimir Restoin Roitfeld and Andy Valmorbida say: "Richard Hambleton’s brush stroke as an artist is genius and is in a league of its own. Most significantly, he is the most important and influential living street artist in the world today, with a story and career that is unparalleled. It is also a privilege for us to collaborate again with Giorgio Armani and we’re pleased to present it in such a prestigious space."
Posted by Aideen Shannon, Features Assistant at 10:19 am