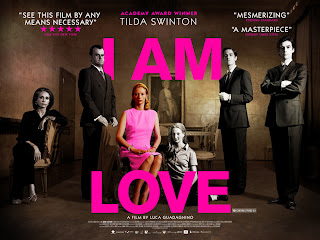 ‘The film is about a woman, named Emma, aged between 40 and 50, who doesn't generate wealth or culture. Her husband Tancredi, a rich manufacturer from , picked her for her beauty, just as he would have chosen a piece of artwork. Emma is a piece of property; she had children and she fulfilled her role and now she finds herself at that point in life when the cage, the prison she has been living in, vividly appears before her eyes with all its explicit drama. Emma comes from a cage, , that she left in the pre-Gorbachev era to have access to the free world. And in the free world she locked herself up in another cage, the family, and lies. Change, overcoming the idea of one’s self, as created by society, has been one of my main interests since Orlando. In Io Sono L’Amore, a film that Luca and I worked on for 7 years, these themes are presented, and they are in a way that is even more magnetic.’- Tilda Swinton on her character Emma Recchi,