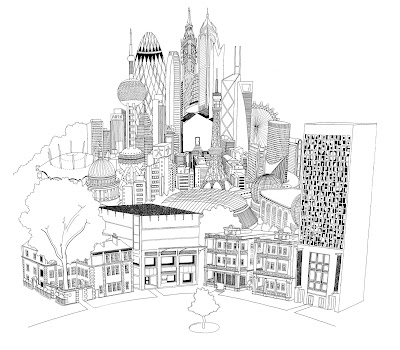 Today, the existence of the Internet has never been more prevalent. At present, there are currently 15,000,000 Wikipedia articles, 100,000,000 YouTube videos & 200,000,000 blogs available at the click of the mouse. With overwhelming numbers such as these, the influence of the Internet and its social networking sites in particular has never been more powerful.
Everyday, designers are looking to the Internet to promote their brand be it through a striking film posted on YouTube or through creating an utterly unique platformS on their own such as Burberry's Art of The Trench site or Vivienne Westwood & Lee's 100 Days of Resistance Campaign.
Now Dunhill have launched a brand new innovation to type into our search engines. DAY 8 is not a blog, nor an e-zine but a fresh perspective of the world through the eyes of Dunhill. Reflecting the brand pillars of Dunhill- Creativity, Elegance, Travel, Culture & Intelligence- DAY 8 incorporates carefully selected and engaging content presented on a highly interactive level. Taking the form of images, articles and film, DAY 8 is available on an online interface and with the DAY 8 app, you can access it wherever and whenever you are.
Launching today, the brand have unveiled an exclusive and extraordinary film capturing London based illustrator Chris Dent as he works on a very special commission by Dunhill. Noted by his unique ability to create densely informative city-scapes, artfully depicted through a bold stroke of his pen, Dunhill approached Dent and asked him to capture the four Homes of Alfred Dunhill in London, Hong Kong, Shanghai & Tokyo and incorporate them into one piece of work.

To celebrate the launch of DAY 8, Dunhill will be selling 20 limited edition signed prints of this piece of urban art exclusively on their website.
Be sure to check it out and keep logging as DAY8 release more and more exciting material.
Posted by Aideen Shannon, Features Assistant at 12:54 pm