Founded in 2008, design duo Magda Katek and Kamil Jerzykowski are the fiercely creative minds behind Ah&Oh Studios, the imaginative hub based somewhere in between Berlin and Warsaw, in the old Poznan district Jezyce. Katek (aka Ah) is the Head of Art and is responsible for the visionary productions the studios unveil; meanwhile her cohort Jerzykowski (AKA Oh) possesses the rather humorous title of Head of Head and is the mastermind behind producing the emerging projects within the company.
The studio's latest conception is entitled "Scent Stories" and was developed on the basis that perfume packaging design had been the twosome's dream project, hence they delved right into the challenge and decided to explore the world of men's fragrance. Their initial tact was to first concentrate on the idea of the scent itself and sought inspiration in the "great, dark literature and distinctive, strong characters". Through such a process, they then set about describing the dark sides of men's nature with a line of scents named after famed writers throughout history. Brandishing the names of literary greats Orwell, Poe, De Sade and Laclos, the artfully constructed bottles resemble the classic shape of the inkwell and have become the new home of the heady scents that they developed. With distinctive black and white colouring and featuring strong, bold lettering, the Pièce de résistance of their designs are heads of characters which loosely recall each author's respective masterpiece. 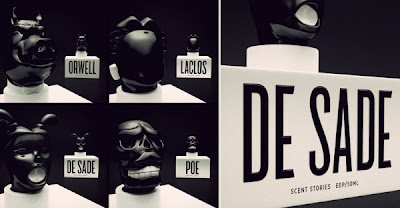