Sail The Time Away 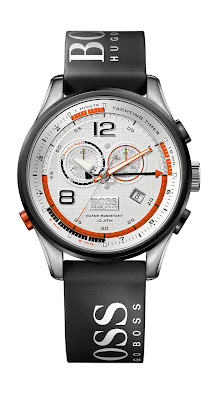 Hugo Boss sponsor Alex Thomson is Britain's most influential yachtsman. Back in 1999, when he was a mere 25 years- old, Thomson received the accolade of being the youngest skipper ever to win the Clipper Round The World Race and since then, his skill and dedication has led him to gain subsequent success. At present, he is the current holder of the 60' monohull distance record, covering a astounding 501miles in only 24 hours.
Working closely with Hugh Boss (his boat is named after the brand and they kit him and the crew out in attire for racing), the yachtsman and the labels' latest collaboration is this horological wonder, The Boss HB 22. Following on the success of their previous Sailing Watch, the new Regatta Watch is a sleek and ultra modern contraption which touts such multifunctional features as a count-down timer, racing-timer and alarm and comes complete with a durable soft silicon strap. In all, this is the ultimate sailing watch-comfortable, practical and effortlessly cool.
Posted by Aideen Shannon, Features Assistant at 10:23 am