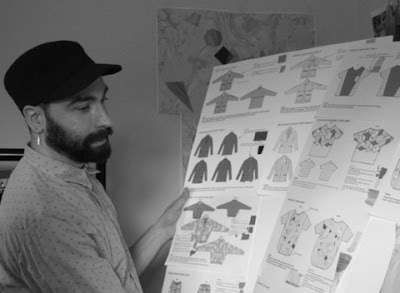 Forgotten Future is the premium menswear label created by Central St Martin’s alum Richard Dawson. Launching his first collection for S/S 10 where he exhibited at On/Off during London Fashion Week, the label has already gained overwhelming praise from the fashion elite as well as a long legion of fans. With a style that captures the beauty of vintage fashion reworked with a sleek contemporary edge, Forgotten Future is a fresh and unique offering courtesy of one of Britain’s leading young designers. After previewing his new collection at this season's STITCH, we caught up Dawson to discuss the inspiration behind his iconic new collection.
How did you first get into fashion design?
I was always drawing and painting as a child, so I suppose I always had a creative slant. When leaving school in the early 90’s and studying for my A-Levels, I was experimenting with the whole grunge look and music scene, dressing down and buying secondhand clothes from markets and charity shops. Magazines such as ‘The Face’ and ‘i-D’ were like bibles to me back then. Later I went on to study BA and MA courses in menswear fashion at Central St Martins.

Why did you decide to call your label Forgotten Future?
As a designer, I tend to look at past references such as vintage clothing details, at trends and movements that have been forgotten or discarded by its former followers. It’s very important to me that clothing is interpreted in a modern and fresh way. You’re always working a year ahead or more, thinking about the future all the time. I was also listening to Joy Division and New Order when I decided to set up this label, so there is a slight nod to that genre in the brand’s name.
Can you describe your new collection for Spring/Summer 2011?
For SS11 I have designed a collection influenced by post-war tailoring and outerwear, combined with vintage sportswear in asymmetric patchworks, to bring a modern approach to the craft. There are broader proportions with a hand-me-down air, seen in casual jackets and tops. Pleat front trousers are softly tapered and utility styled. Marble and marquetry patterning inspires the season’s graphic print featured on lightweight jersey tops, and several garments are reversible enabling two looks in one. 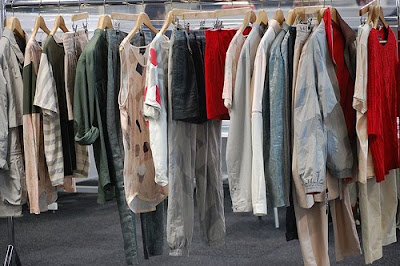 Where do you find your inspiration?
Initially, I take inspiration from details in vintage clothing such as the ‘Hunter Jacket’ from this season or the reversible jacket idea, which came from an old shell suit. I’m always looking around markets (Portobello is still my favorite) and charity shops. Inspiration may also come from art movements like constructivism and old photographic albums that I find on my outings. Also I’m influenced by youth movements and music scenes, such as the NYC ‘no-wave’ scene, which inspired the previous collection.
Define the “Forgotten Future” man.
He’s an individual, creative, into progressive fashion but without looking difficult.
What different materials do you use in the new collection?
For this season I sourced perforated cotton and new synthetics as I wanted to give this collection a sporty feel. There are also natural fabrics like brushed cotton, voile and metallic linen with the synthetics on asymmetric patchworks. Any favorite materials you find yourself using time and time again? I love using peached silk; it has a very soft handle and a washed matt appearance. Also linen, I like how it hangs and creases. Producing the same sample in linen and then a formal fabric gives a completely different feel and look to the silhouette of a garment.
Who are your own personal style icons?
Ian Curtis - he didn’t do the obvious jean and T-shirt look, wearing the same clothes to the office and the stage. Morrissey in the 80’s, 50’s art student meets English Indie kid. I love off camera shots of James Dean, he looked like effortless perfection with a streamlined casual approach. Kurt Cobain for dressing down and being the face of grunge. If you could go back in time and experience any fashion moment, what would it be? I would like to have experienced the energy and fashion of Punk 75 -77 before it became a cliché. Also, to be a teenager in 50’s America (but without the repression), when the whole youth movement influenced fashion for teenagers. I like both preppy and greaser.
Posted by Aideen Shannon, Features Assistant at 12:22 pm