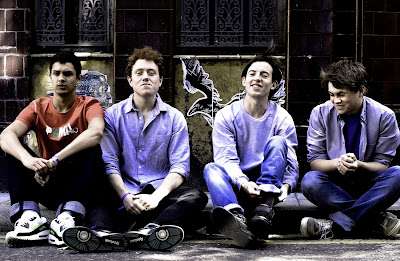 Since their sterling debut album I Had the Blues But I Shook Them Loose, Crouch-End based Bombay Bicycle Club have gone on to achieve critical acclaim like no other. With an inaugural collection of songs that truly epitomized indie cool, the band have not only gained a series of accolades but a long legion of loyal fans.

Their latest offering entitled “Flaws” is a considerably more acoustic affair and perhaps marks a notable change in their direction. The beautifully written and complex album is testament to this band’s musical ability, while their whirlwind calendar of tour-dates this summer (from major music festivals to gigs at churches and arts centres) prove these boys are no doubt a force to be reckoned with….


So tell us about your new acoustic album Flaws…
Well making acoustic music is something we’ve always done; the album probably started with what we thought was a b-sides session that my dad was producing. Over the next year or so the album was finished in Jack’s bedroom, it was a pretty informal process, which was a nice change after the intensive sessions for the first album. The whole thing has just been reinvigorating for us I think.
Can I ask, what’s with the church tour? Is there a symbolic reason behind this?
Well when you’re playing quiet music it’s important that people are quiet, otherwise you end up not being able to hear the music, in a church you’re not going to talk loudly.
How has your life changed from doing basement gigs and support acts to massive festival arenas?
Not really, I write this from my parent's living room. Being in a band is definitely all about extremes, either you’re playing gigs and recording or sitting around doing absolutely nothing.

Where do you see your sound going from here?
Well the next album is going to be electric again, though might have one or two acoustic songs on it. I probably see the next album carrying on from songs like always like this and the giantess. After the next album who knows though, maybe another acoustic album or maybe something completely different.

Their new single, ‘Rinse Me Down’ will be released on September 20th.
For more, Click Here.
Posted by Aideen Shannon, Features Assistant at 11:19 am