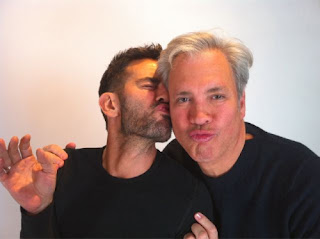 What is really going on at Marc Jacobs? We've been hearing all sorts lately and even though we are finding it hard to believe most of them, more and more people are coming forward with bizzarre stories.It looks like some employees or former employees are not really happy with  CEO Robert Duffy.

A former CFO of Marc Jacobs International is allegedly suing the company, Robert Duffy and LVMH (not Marc Jacobs himself) because as he claims the CEO is using company money to pay off personal expenses, makes employees watch gay pornography and also he comprised a book where all employees were asked to be photographed in awkward sexual positions (according to the NY Post). This all sounds very peculiar!

On top of that an ex- intern hijacked the MJ twitter account claiming that Robert Duffy 'is a tyrant' and wouldn't advise anyone to apply to work for him.

Is there the slightest bit of truth in these allegations or is it just bitterness?

By Andreas Menelaou Features Assistant
Via http://7thwomanmagazine.blogspot.com/
Posted by Features at 12:30 pm