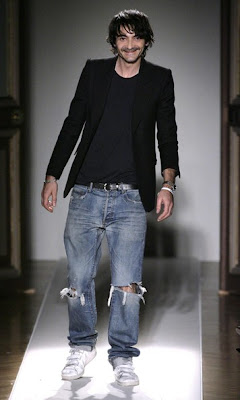 Is this the end of fashion as we know it? What is going on? Following news that D&G might be closing down and John Galliano going to trial,WWD reported that creative director of Balmain Christophe Decarnin was recently hospitalised for depression but did have a say in the latest collection.
Fashion editors and bloggers were left waiting for the designer to take his bow after the Balmain a/w'11 show in Paris but the lights went off immediately when the last model walked off the runway. That very same minute speculations of the designer being in a mental hospital surfaced but not only that,several blogs and websites reported that the creative director no longer works for Balmain and hasn't since January.
Super-chic stylist Melanie Ward with Decarnin's team apparently whipped up the latest collection but everything was kept on the down-low so business wouldn't be affected.Could there be any truth in all of this?
Surely someone must have put a curse on our beloved designers!
By Andreas Menelaou Features Assistant
Posted by Features at 11:06 am