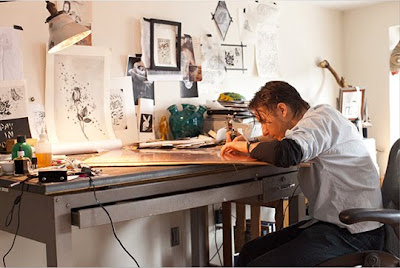 For S/S 11, Louis Vuitton has teamed up with infamous Brooklyn based tattoo artist, Scott Campbell. Perhaps best known for works such as his laser cut money wads with tattoo style subjects, Campbell was approached by Louis Vuitton having felt his unique and youthful creativity best reflects a new era for the luxury French label. For the new season, Campbell has worked with the house on an extensive mix of scarves, ready-to-wear pieces, shirts and a limited edition "laser etched" weekender bag.

In conjunction with this collaboration, Louis Vuitton has released this short viral film. Here, viewers are invited into the creative universe of Campbell as he embarks on his daily pursuits. From taking his daily jog, to delving into his artwork, to speeding across the streets of New York; viewers are left wondering what his next destination will be as he packs up his sleek Louis Vuitton luggage and hails a taxi. Never fear, all shall be revealed in the next installment...

Posted by Aideen Shannon, Features Assistant at 10:36 am