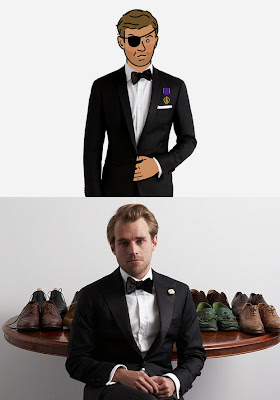 Growing up in Australia, Patrick Johnson was immersed in a world of English Dandyism thanks to the eccentric wardrobe of his father. Such an example led this impressionable youth to acquire an unavoidable taste for British gentry and it wasn't long before Johnson found himself at the epicentre of burgeoning British Fashion- Central St. Martins. After a stint apprenticing for bespoke shirt maker Robert Emmet, Johnson then decided to return to his homeland, and with him, his new affinity for British tailoring. On opening the hugely successful Suit Shop, he redefined staunch classic suits with a fresh contemporary flair and in return lured a long legion of fans.
Now Johnson works only by appointment, as Suit Shop has transformed into the bespoke service of P. Johnson. In honor of his new enterprise, Johnson has styled his latest creations on some humorous characters, one of which -with his sandy quiff, facial hair and penchant for black-tie attire- looks suspiciously like Johnson himself (Sans the dastardly eye-patch, of course).

For more, click here.
Posted by Aideen Shannon, Features Assistant at 11:18 am