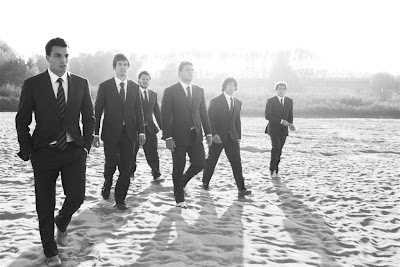 "Fashion should be fun and should send a message", were the immortal words of Franco Moschino, creator of the house of Moschino back in 1984. Today, his words are still ingrained in this label, synonymous for its sense of playfulness and pieces imbued with a deeper sense of meaning. Moschino's latest venture most definitely pertains to a distinct sense of patriotism as it recently designed the Aironi rugby team's new official suits.
The Aironi rugby team has been making its mark on the rugby world recently, as it is one of two Italian teams that have started playing in the Magners League championship this season against teams from Wales, Scotland, and Ireland. It is also vying for the Heineken Cup, the most important continental competition that gathers top rugby teams competing for the European title. Many Aironi athletes also play on Italy’s national team, and some are considered the stars of tomorrow in Italian rugby. 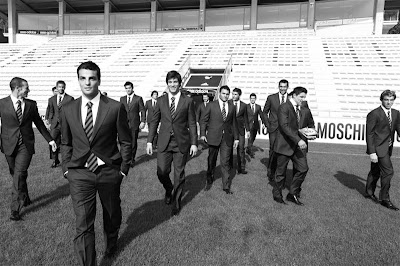 By joining forces with Moschino, this collaboration signals the first time an international fashion brand has dressed a rugby team. In honor of this pioneering partnership, Moschino have designed the ultimate rugby player suit. Bringing to the forefront a distinctive British tailoring aesthetic, the suit incorporates subtle yet meaningful features as a heart embroidered within the inside of the jacket. Symbolising both Moschino and Aironi, this icon represents shared qualities such as loyalty, team spirit, and a sense of sacrifice. The official suit is completed by a white shirt that, like a game of mirrors, has a red heart embroidered on the pocket, a regimental tie with the Aironi emblem on the stripes, classic Oxford shoes, and a black belt with the Moschino logo.
Needless the say, the Airono team shall be one of the more stylish teams hitting the pitch this season...
Posted by Aideen Shannon, Features Assistant at 3:44 pm