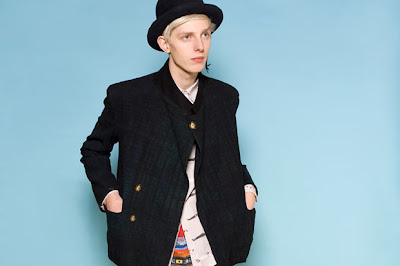 Agi&Sam are a London based design duo offering a fresh approach to contemporary menswear. Injecting a signature whimsical twist to their print-heavy designs, their garments are tailored to a high-class designer level (thanks to stints at the studios of some the fashion world's most esteemed designers) while at the same time ooze a certain "Don't take me to seriously" sensibility. The perfect sartorial balance no less...

What’s your background? How did the label begin?

Agi&Sam is the collaboration of fashion designer Agape Mdumulla and print designer Sam Cotton. After graduating in 2008 we both moved to London in a bid to pursue interests in our respective professions, working for designers such as Karl Lagerfeld, Alexander McQueen, Carolyn Massey and JW Anderson.

After interning for a couple of years and becoming exasperated mainly for working at the behest of other people’s vision’s and also at the frustration of not getting paid, we decided it time to put our heads together and do whatever the hell we wanted. Agi&Sam was thus founded at the beginning of 2010.

As designers, what led you to menswear?

A: I guess being male is my fundamental reason for having a fascination with menswear.
On the surface its abit of a reaction to my own personal annoyance of not being able to find or buy clothes that are original and interesting and at the same time similarly not too far pushed to the point of un-wearable. It annoys me also that generally, such clothing is not available unless you look to the pioneers of high fashion and spend a fortune, or trawl the endless archives of second hand and vintage clothing, which itself can be an absolute ball-ache.
Finally, having a strong interest in design and anything creative is a factor. For me, putting these energies into something so practical and really is quite exciting.

S: Print really hasn’t be explored that much within Menswear. Most of the time people either think too literally about print or get far too emotional and pompous. I suppose I wanted to try and take a different approach to it while still making it wearable. I like that there is almost a formula to menswear, while Womenswear has endless possibilities. Although there is a lot more to explore within Menswear the boundaries are still quite tight. I feel you have to be careful you aren’t going too far into the unwearable, something which designers often try. It’s all very well to design something crazy and get it into an editorial, but when that garment costs £1000 to make and you can’t sell it, you will end up sinking faster than you can swim.

How would you define your style of clothing?

A: A little bit indie with a mix of traditional English. Im a big fan of colour and print, and I usually get this from my love of old vintage horrible knitted jumpers. My old tutor at university once defined my style as refugee chic.

Where do you get your inspiration?

A: Anything and anywhere. Im quite an eclectic person so it can literally be anything from an inspiring story in history to a conversation I had with my dad. I try to keep my head filled with influences by way of going to exhibitions, watching films, reading and listening to music, but my best ideas generally come from quite mundane and obscure places, and then develop over time.

S: We learnt a lot about research from Alexander McQueen. He would literally cover every avenue of Art and Culture to obtain reference for his collections. We like to do the same. It makes the collection more universal and can be understood by viewers who may not even have an interest in fashion.

Any favourite pieces from the new collection?

S: I like the Hand Painted Totem Pole Face Jacket, painted and then printed to look like wool. This collection was about printing texture, making digital print stand out a bit as some times it can look a bit flat. Using paint and wool textures tricked the eye into thinking it had texture. People have been emailing us asking about our ‘knitted fairisle leggings’ when I explain they aren’t actually knit but printed to look like knit, they seem to like the leggings even more.

A: I think the fairisle digital print sweatshirts are probably my favourite as they’re essentially quite simple, but at the same time, in my eyes, embody everything we wanted to get across within this collection, not only as a concept but also within our brand ethos.

You're currently working with musician and producer Labrinth. Can you tell me about this collaboration?

A: We’ve been working with Labrinth for a while now and it’s quite a nice process because artistically we have the same interests and viewpoints in terms with what we want to achieve and how we want this to happen.
At the moment we are working together on his next music video, due to come out at the end of the year, and another project, which we are very excited about but cannot really say much about until everything has been properly finalised.

S: He is a really talented guy; songwriting, singing, composing, production. People are starting to pick up on this and recognising he is well on his way to being the next big thing. He has been approached by every brand out there and the support and faith he has put into us is quite humbling.

Where do you hope to see the label in the future?

A: I hope it will always continue to grow and develop, and in the future is considered a respectable label that endeavour’s to push menswear creatively but still always stood on the side of wearable.
We’ve done a lot of research into the historical and social reasoning’s of menswear as a whole and why it is the way it is, so I hope we can continue to use this valuable information as a guide and push men to be that little bit more daring without feeling ridiculous, vulnerable, or more importantly, un-masculine.
For more see Agi&Sam
Posted by Aideen Shannon, Features Assistant at 3:17 pm