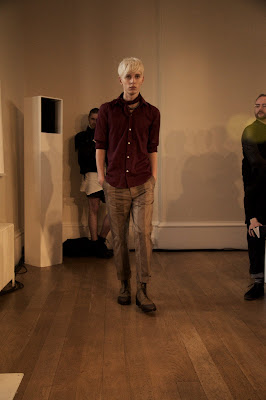 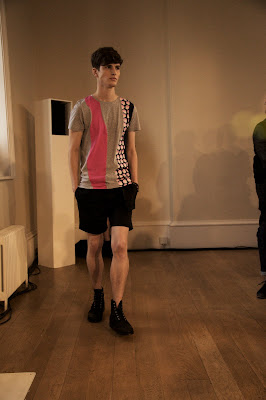 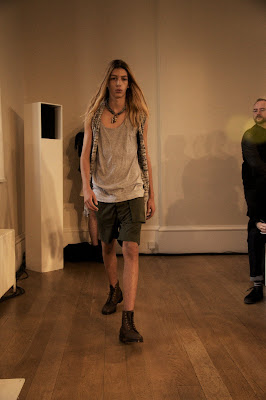 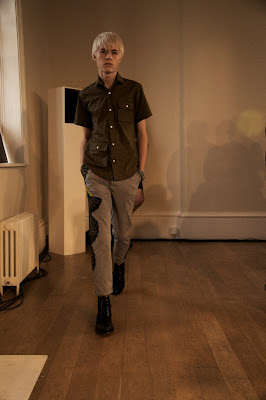 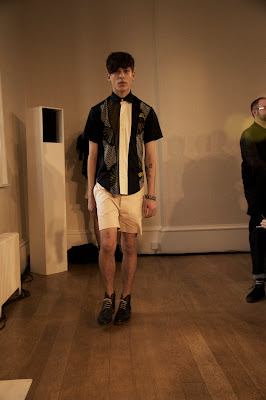 The morning's proceedings of London Fashion Week's dedicated Men's Day, kicked off bright and early with Lou Dalton's S/S 11 showcase at Somerset House. Despite the early rise, the airy show space was alive with chatter and bubbling anticipation as the models took to the runway.

Having described her designs as “Rebellious English sportswear with a strong attention to detail”, Dalton’s new collection once again fuses her signature touches of eccentricity, this time making a nod towards the nomadic lifestyles and nonconformity of the Romany people. Inspired by their "make do and mend" philosophy, Dalton takes a designer spin on the threadbare clothing of this traveling culture, while at the same time bringing to the forefront their love of embellishment combined with functionality.
The result is a rich collection, perfect for the new season. Blazers brandishing ethnic touches are teamed with shorts that have been vertically patched together with raw edges. Light-weight knits and buttoned up shirts feature throughout, while the accessories of the moment were lace-up boots and straw hats.

Overall it was a neutral palette of navy, maroon and tan, however true to her original influence, Dalton incorporated bold splashes of hot pink patterns and even the odd bright blue frill to her designs, proving that it's even the smallest of touches that can bring a collection to a whole other level.

We caught up with Lou Dalton during a preview of her new collection at this year's STITCH to find out more about one of Britain's leading menswear talents:

As a designer, what led you to menswear?
I left school at sixteen to enroll onto a YTS scheme (Youth Training Scheme) at a tailoring company in my hometown of Shropshire called Pardie Clothing. Although Pardie Clothing did make the odd bespoke suit for a woman it was predominantly Menswear. Being exposed to Menswear from that age was very much the foundation to what I do now; it just seemed the obvious and most suitable choice.
Do any other designers influence your work?
Not so much influence, but inspire.
What is your working process?
The Spring/Summer Collection was completed back at the end of June and is currently being sold at wholesale, with the salon show on the 22nd of September. We are currently working on the looks for this, using those items that were completed back in June and adding additional showpieces. We have a couple of collaborations on the go for September which is exciting, as well as the new website with online store going live early September.

Tell me about your new collection for Spring/Summer 2011.
The Spring/Summer 2011 collection is inspired by the nomadic lifestyle and the nonconformity of the Romany people. A life on the road doesn’t allow for much, however the “make do and mend” nature of their threadbare clothes does not detract from the eccentricity of an aesthetic full of passion and pride of their ethnic identity. A traveling life means little luxury, yet the utilitarian functionality embraces the breadth of cultural diversity encountered on the road. With a magpie’s eye for detail, simple garments have life breathed into them drawing on influences from as wide spread from as India, Europe and North Africa, through the use of paisley prints and African Dutch wax printed cottons.

What kind of man do you imagine wearing this collection?
A confident individual, one of many.

What’s your favourite piece from the new collection?
There are two areas of the collection that I am most happy with, the first being the raw-edge, super fine mohair; the second being a mix of light weight denim and Dutch wax African prints.

Where do you see menswear headed in the future?
In terms of product, I think the general feeling is value for money and longevity, can the design stand the test of time?
Posted by Aideen Shannon, Features Assistant at 12:20 pm