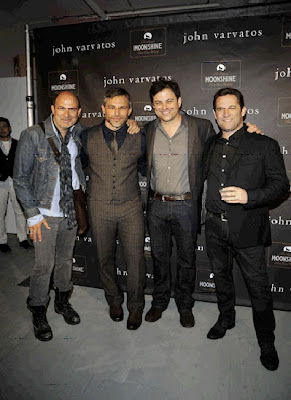 With New York Fashion Week in full swing, there are plenty excuses to party. But there was one party everyone wanted to attend. This week marks a full decade since the launch of the achingly-cool label John Varvatos, and in celebration, the designer threw a star-studded affair in collaboration with Stillhouse. The party (which was in support of the VH1 Save The Music Foundation) kicked off at cocktail hour, premiering Original Moonshine Clear Corn Whiskey and was hosted by Stillhouse Co-Founders Brad Beckerman and Adam Perry-Lang in celebration of Varvatos's 10th Anniversary.

Brandishing the tag-line "Prohibition Is Over", the event had an all-star lineup of musical legends who pulled out all the stops with a concert which included iconic performance from such greats as Alice Cooper and Cherie Currie. Notable guests who were in attendance were Chris Brown, Jimmy Kimmel, Jeremy Piven, Serena Williams, Kelly Brook, Julian Lennon and Sarah Silvermen, who not only enjoyed a night of some seriously good music, but had the opportunity to sample Stillhouse's menu of signature Original Moonshine Cocktail's such as Ginger Shine, Shine Punch and Shine Tea.
Brad Beckerman stated on the collaboration, “Tonight is the culmination of three years of hard work, and the beginning of a long, prosperous brand. We are going to do everything we can to be as legendary as John Varvatos and the rockers that killed it here tonight.”
Posted by Aideen Shannon, Features Assistant at 1:02 pm